Okay, I was talking last about my idea(s) for an electronics project, and I think I have enough of it thought about to sketch it out. I'll also point out where I got some of the specific parts for the project itself, in case you want to follow along at home (please don't, I don't know what I'm doing). 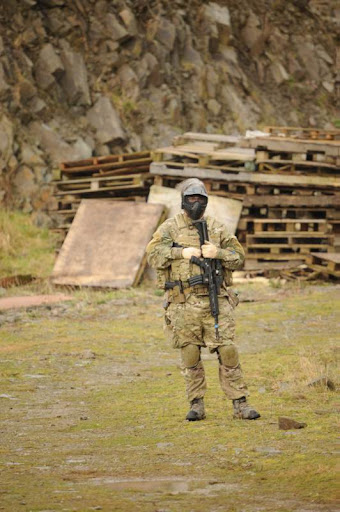 Those who are familiar with my escapades will know I'm into Airsoft, which is kind of like a bunch of grown men playing army with pellet guns. I've got a reasonable amount of kit, and have travelled quite a bit to various events and venues both Irish and abroad.

One of the venues I've been to a good few times is Sennybridge FIBUA Village in Wales. It's a Ministry of Defence training village that the British army uses to take pasty-faced youths and turn them into wet pasty-faced youths who want to go home. On a few weekends in the year, though, they open it up to pasty-faced middle-aged escapists to play 24-hour overnight Airsoft games. I've been to five of these so far, and I've another one coming up in April.

So, to the idea. One of the features of the game, of course, is being a sneaky git. It's the sort of game where World War I tactics of running line abreast at the enemy is unlikely to work. Sennybridge is comprised mainly of 2-3 storey buildings, which usually have between 1 and 3 entries. Usually you and a squad of 8 guys will take and hold the building until told otherwise. Sometimes this'll be at night, and you have to keep an eye open for people trying to take the building from you. 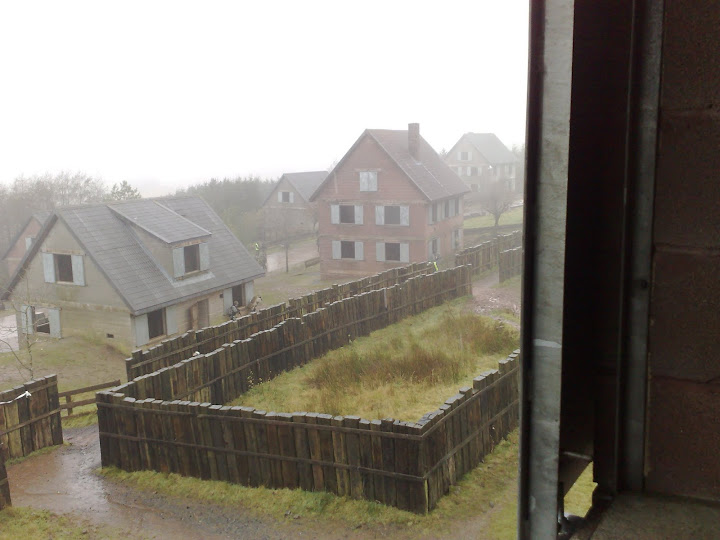 What would be nice is to be able to find out if someone's being a sneaky git and is sneaking up on you. So, something like a motion detection alert you can drop or conceal that'll let you know if it's time to watch those stairs.

Motion detection sensors are pretty easily obtainable, for less than a tenner. Sparkfun have one, and I'm sure there are other, possibly cheaper suppliers. After that it's about deciding what you do when you detect motion. So, I've ordered what I plan to do, in order of complexity (i.e. in order of likelihood to actually get done).

Pretty simple, really. If it detects motion, it makes an audible sound. You could also possibly switch it to 'night mode' where it makes a sound (so the person who set it off looks in that direction), and then it flashes a blinding white light, to screw up their night vision. I've picked up a X5 White LED PCB in Fry's that might do the job, if I can get enough power to it. Maplin also had a decent-sized buzzer, which you could make buzz with a couple of 555 timers. I like this idea because it could end up potentially costing less than 20 quid in parts, and I could make a few of them. It may not even require an Arduino (I know it doesn't strictly require an Arduino, but it may not require an Arduino even for an electronics leper like me).

Incidentally, a great primer on 555 timers is in the Make: Electronics book, which I just read through on the train. They're tiny, cheap as chips (ho ho) and can be very powerful if applied correctly.

A lot more complex, but potentially more effective. The sensor itself doesn't need to make a sound (although I could leave the flash in, since it has an effect). The sensor could alert me wirelessly and silently to it being tripped. I looked into a few options for this, including good old 802.11, but XBee seems to be interesting, and I've picked up a few XBee RF modems. Sparkfun and SK Pang have them, as well as Radionics.

The sensor part could be quite similar to in Idea 1, except with a small antenna. I've also picked up some wearable LilyPad Arduino kit for the part attached to me. This can be powered from a couple of AAs or a small 3.7v LiPo (although probably AAs. I'm trying to limit my exposure to having lithium fires break out in my pockets). The alert could be audible, or could be via the LilyPad buzzer in a glove. So, someone sneaks into the building downstairs, and the back of my hand buzzes.

There are a few more ideas that came out of these, but this is the basic idea. Idea 1 is looking more likely, since I'm actually more likely to make it, the components are a lot cheaper (I'm entirely prepared for one or two of these to get stepped on, nicked or lost) and it's more likely to actually work reliably.

I've already done some exploratory work on XBee and motion detection, which I'll cover next. I've picked up a few PIR Motion Sensors and will document the fiddling next.
Posted by Unknown at 18:23

Email ThisBlogThis!Share to TwitterShare to FacebookShare to Pinterest
Labels: arduino, electronics, me, tech