[Man, the editor in Blogger is terrible. I may move this if I start using it more.]

So Arduino, and electronics in general. To give some background, I seriously could not electronics my way out of a wet paper bag. I know what a resistor is, and Ohm's law. I know that a capacitor is the big metal cylinder you don't touch, and that soldering is a pain in the hole. That's about it.

I'll attempt to speak in English about this stuff, basically.

Step one to getting yourself set up with a new hobby is, of course, buying a load of expensive kit. Happily, a lot of this kit is not expensive at all. I'll list the basics I got, and where you can get them. This is pretty Ireland or UK-specific, since that's where I live.
Firstly, you're getting into a word of hurt when it comes to organising stuff. Electronics stuff is small, and there's lots of different bits. Get set up with some sort of system for organising stuff. I got some various-sized bins from Safety Direct (I got one of these sets). That's still pretty coarse, I'll probably end up getting a fiddly-little-bits organiser, too, but I've yet to find one. 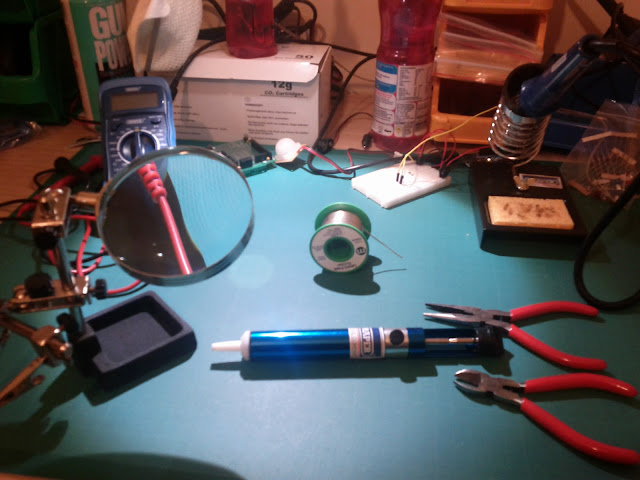 I got my soldering iron, stand, desoldering pump, multimeter &c from Amazon UK. There's more and more of their stuff that ships to Ireland, which beats the hell out of a lot of hardware places. All these are pretty much essential. I also got one of those green craft mats with the grid on it, which are supposed to be useful, bit I think it just makes the cheap IKEA desk look like a workbench. Stay offa my "work" "Bench", cat.

I got solder, some various bits of wire, and a Helping Hand (that funny clampy dude with the magnifying glass for a head, who is also essential especially if you're blind like me) in Maplin in Dublin. Don't go near Peats, they're now quite useless when it comes to electronics stuff.

I got the component bits from:

- AdaFruit, who also have an excellent getting started tutorial on their site with lots of 'what to get' lists if you're in the states. I only got one or two things I couldn't get anywhere else from here, since shipping to here takes more than a week, and you'll almost definitely get stung for customs, plus six quid for An Post and a postman trying to have a fight with you (but that's another story).
- SKPang look to be top notch from my experience, have mae 4 or 5 orders so far and they usually ship same day and get to Dublin within 2.
- Radionics are a little spendy, but their range is fantastic. They also deliver next day in Dublin for 4 quid, which is nice if you get all excited about some parts you want. They have some Ardiono stuff, and have XBee modules in stock for less than you'll pay SK Pang.

I've also gotten some bits and bobs off Maplin UK, who do 'component lucky bags' in case you've always wanted to have a big bag of random potentiometers. Potentiometers are those guys with the twiddle on them.

I've watched a bunch of youtube videos (here is a good channel with random stuff on it, some useful, some not). I've also read a few online things. Basically I found out what a resistor, capacitor, voltage regulator, diode, and a few other friends do basically. I also remembered there's a unit called the 'henry', which I last heard about while listening to Therapy? down the back of physics class sometime in 1995, using that super-elite trick of putting a headphone in your sleeve and leaning on your hand.

I also read LadyAda's Arduino tutorial, which is a good start. I didn't actually go through any of the exercises, but reading through them is a good way of getting familiar with the basic concepts.

I noted last time that I didn't have a good project Idea. Well, now I do. I've to look more into it, but will fill you all in next time.
Posted by Unknown at 22:16